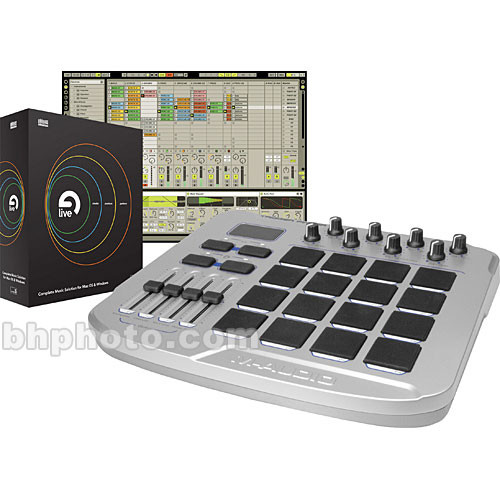 Quick links. Post Tue Jan 20, pm First of all, I really appreciate the time and effort put into setting up this new forum. Thanks for giving people like myself the opportunity to ask questions and learn from other Reason users. Now, my question: The price of the M-Audio Trigger Finger Pro has been dropping in price lately, making it more worthwhile considering its pretty large feature set.

I am seriously considering buying it now and trying to resist my GAS. However, I keep reading on forums that it's hard to sync with the midi clock of various DAWs. Also, I understand some owners have major latency issues.

I saw a couple of people with the TFP in their signatures, so I assume there are people around here that use it with Reason. Does anyone care to share its experiences with the following stuff that seems to be bothering other owners: Do you have any problems with syncing the midi clock coming from Reason? What's the latency using it as a controller inside Reason? Are you also using the TFP as an external instrument, routing the audio to Reason? Any latency issues there? Other considerations? Thanks a lot!

Post Tue Jan 20, pm with midi clock I do have some problems. As a pad trigger recording live trimming on the pads into reason I do not notice any latency. I've only had it a few days so not used it so much yet. Even with these problems I love it because it so easy to program a beat on it and for the most part a quantize is all that needed to get it to sit with the song your making. I have been using the Machine Mikro to program beats before I got the TFP and even there I would need to quantize and could not record a whole beat in one go, so to me it's an improvement to my workflow even if it's not perfect.

And do you run a Mac or Windows machine? Post Thu Jan 22, pm Thx Gullum! Post Mon Jan 26, am thnx fellas for the information. Post Tue Jan 27, am DeltaHotelVictory wrote: First of all, I really appreciate the time and effort put into setting up this new forum. Windows 10 Reason The pads fucking rock. Nothing else like them, IMHO.

On-board step sequencer worth the price alone. Worth every penny.


Post Tue Jan 27, am got me one yesterday. Post Tue Jan 27, am Defenitely an interesting device. Mainly because it has real CV out next midi. There are various methods of programming the values for each of the eight knobs, four sliders or 16 drum pads. Generally speaking, it's simply a case of double-clicking on the virtual knob or slider to launch a pop-up Editor menu which gives you access to the available parameters for that particular control.

The pads actually have three clickable areas each — for note assignment, continuous controller value and program change number — and clicking on any of these will bring up the appropriate Editor window.

The Editor menus also allow access to certain global parameters, such as the Global MIDI channel and the overall Velocity curve settings. Obviously, if you change these values in one window, then they'll apply to all the others. Usefully, each window also has a comments field, so you can write memos to remind yourself what you were trying to do.

Simply pop them on top of the desired button or slider and they are assigned. The right-hand menu offers an extensive range of controller 'libraries'. This can be a very painless way of setting up the Trigger Finger's knobs and sliders to control elements of your software studio. Transferring patches between computer and the Trigger Finger is then a simple matter of hitting the Upload or Download buttons as appropriate.

It's all very slick, and so much more transparent than trying to program the unit from its own control surface. Which explains why the manual encourages you to use Enigma if at all you can — advice which I would recommend you follow. Physically, the unit is a neat, chunky thing, smartly presented in today's essential colour — silver. 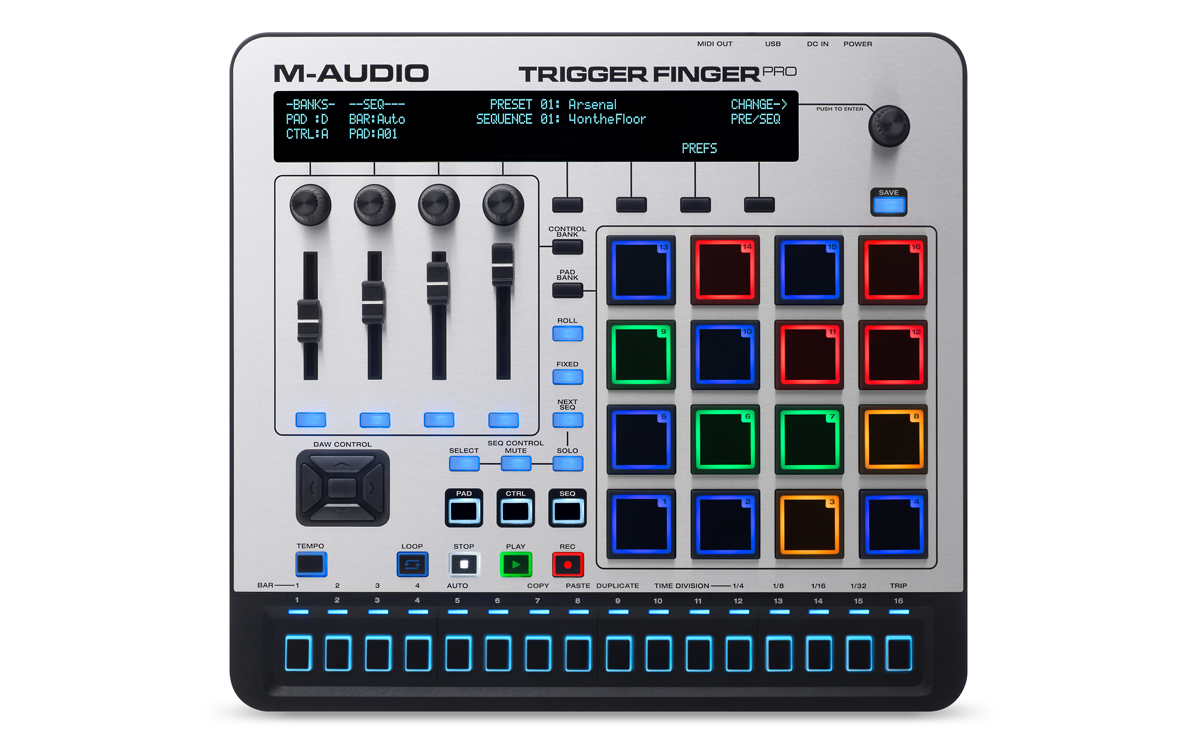 Although the casing is plastic, it seems pretty robust and feels as though it would be well able to stand up to a life on the Highway Of Rock. For that purpose, you'll find a threaded socket on the back panel which will allow you to mount it on a mic stand, though it probably works better sitting squarely on something which supports its entire surface area. There's also a copy of Live Lite 4 on the second CD-ROM a cut-down version of Ableton's rather nifty sequencing software , which allows you put the Trigger Finger through its paces straight away.

The snag is that Windows will only support the use of USB devices like this with one music program at a time.

So if you want to use the Trigger Finger across several applications running simultaneously and most people will , it's a question of taking a three-minute detour to install the included multi-client driver. Job done. But if you have too many USB devices hanging off your hub already, or if you have a spare mains socket that you want to fill up who am I trying to kid?

Of course, such an adaptor will become a necessity if you want to hook up the Trigger Finger via its MIDI Out — for example, if you're using a different operating system to the ones mentioned above, or if you're connecting it directly to another piece of MIDI hardware, such as a synth or sampler, without going via a computer. M-Audio have crammed an awful lot of functionality into the Trigger Finger and the three-segment LCD leads a hectic life telling you all about what's going on.

For example, in Performance mode, the display normally tells you the number of the currently selected kit. When you hit a pad, the LCD briefly displays the velocity value and then shows you the name of the note assigned to that pad. This is quite useful when you are just checking which note number is assigned to which pad, but once you start playing more complex rhythms, the resultant lightshow becomes a little bit distracting.

Definitely of real practical use though is the fact that as soon as you move a knob or slider, the LCD gives a readout of its value. What's more the Trigger Finger also offers a Control Mute function, allowing you to move knobs and sliders to new positions without actually transmitting the corresponding MIDI data. You still see the changing value though, which means you can precisely match the controls to a software or hardware instrument without causing jumps in the sound. For good measure the Trigger Finger also offers a Note Mute function, whereby the pads stop transmitting notes but continue to transmit controller values as do the knobs and sliders.

The thinking behind this function is to make it easier to interface with software or hardware that has a MIDI Learn function, so that you're not confusing things by transmitting note information every time you hit a pad. Once power is supplied, by whatever means, the Trigger Finger's triple LCD springs to life and you're ready for the off. As it arrives from the factory, the unit's 16 patch memories are already filled with templates of note and controller assignments designed to work with typical setups. While this is approach is meant to take the sweat out of getting down to some serious tapping as fast as possible, in practice you'll probably need to shift straight into Edit mode to start integrating the Trigger Finger into your specific setup.


It's as you start to work on your own patches that you begin to appreciate the degree of programmability on offer. For example, the pads can transmit note data on one channel and program and bank change information on another. As well as being velocity sensitive, they are also pressure sensitive, enabling you to send programmable MIDI controller information based on how hard you press them down. It's similar to aftertouch on a keyboard and offers some very creative possibilities.

For example, you can create more realistic-sounding tablas or African drums by using pressure to transmit pitch bend. You can also set up the pads so that crash cymbals 'choke' the sound cuts off when the pad is pressed down. Also you could assign some pads as controls to affect a whole kit globally. So while you might tap out rhythms by playing a set of pads with one set of fingers, you can use the fingers on the other hand to press down on other pads to change overall volume, pan position, pitch, effect levels and so on. The Trigger Finger offers a number of options to take this kind of control a bit further.

Programmable Maximum and Minimum values allow you to set the upper and lower range of the pad's pressure controls, even enabling you to invert the pad's response under pressure — so pressing harder sends a lower CC value than pressing lightly. Again, like the pads, each control can transmit on its own MIDI channel, or it can use the channel that has been globally set for the unit.

As I've already mentioned, the 16 drum pads are velocity sensitive with global programmability of their responsiveness set via nine predefined velocity curves.